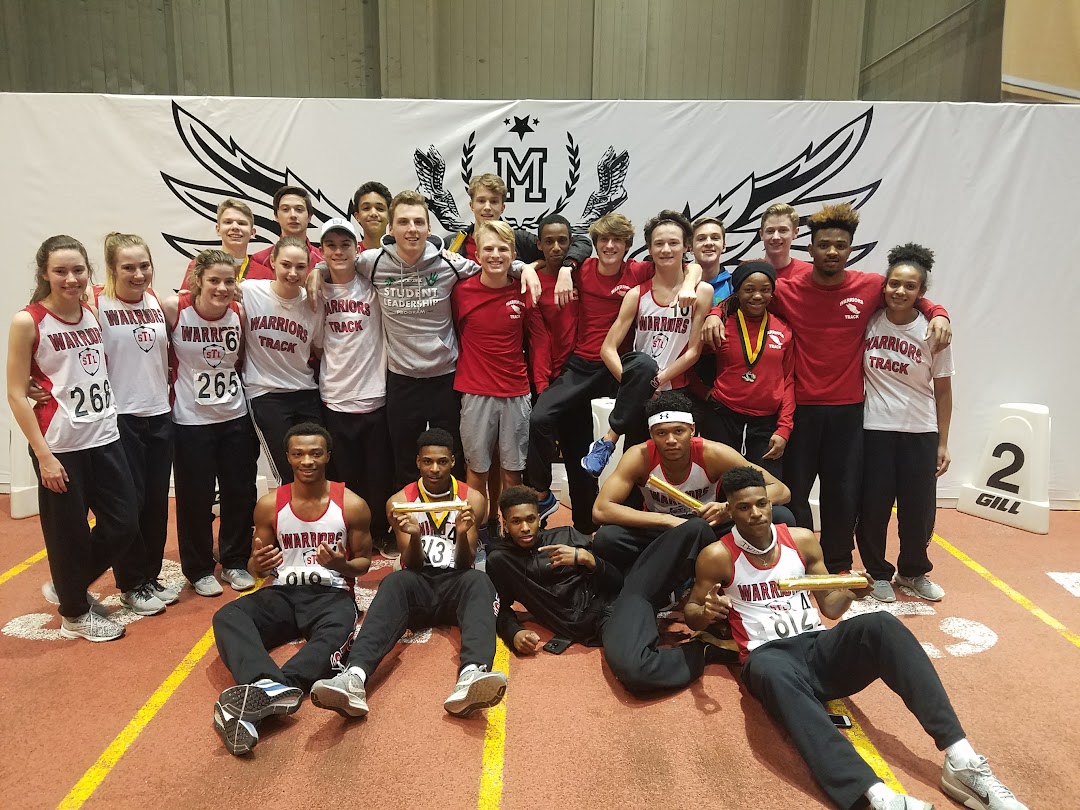 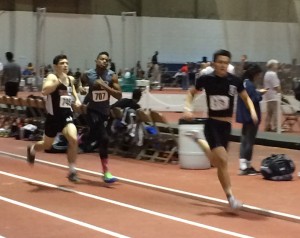 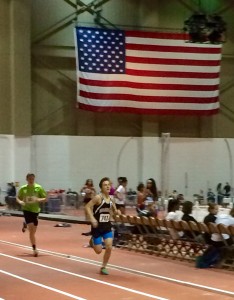 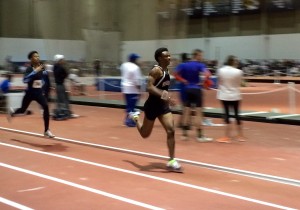 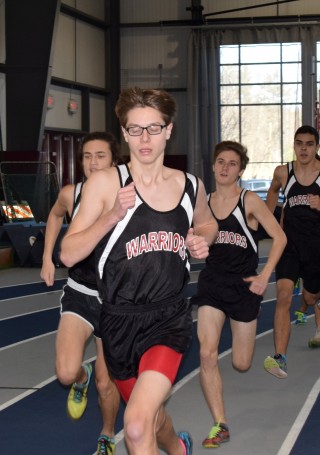 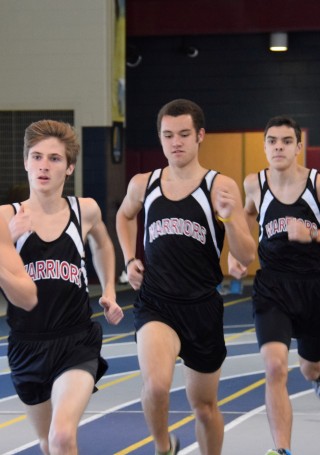 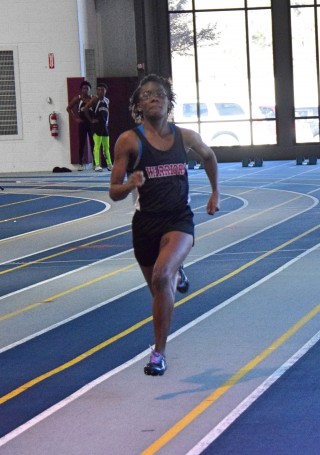 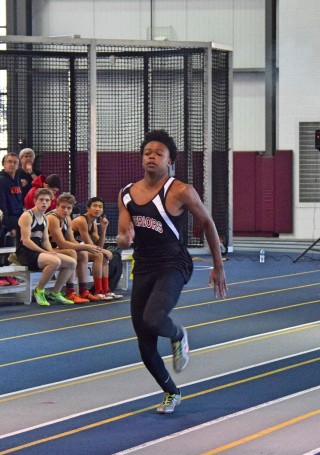 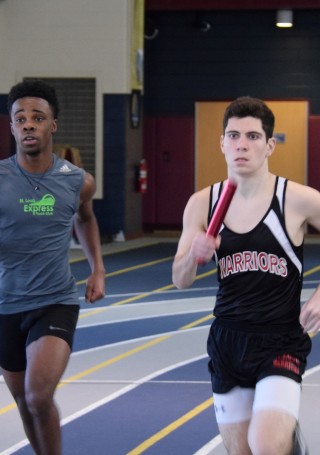 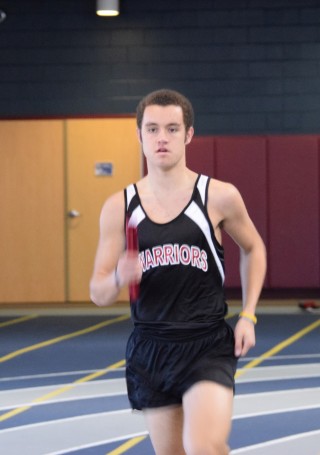 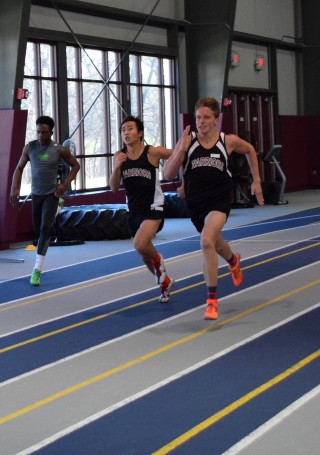 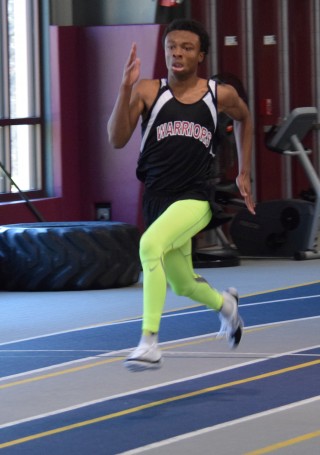 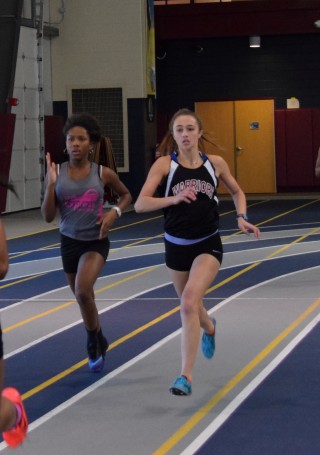 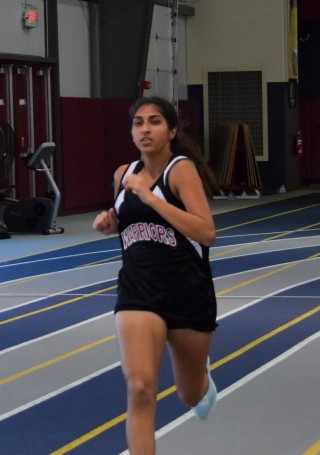 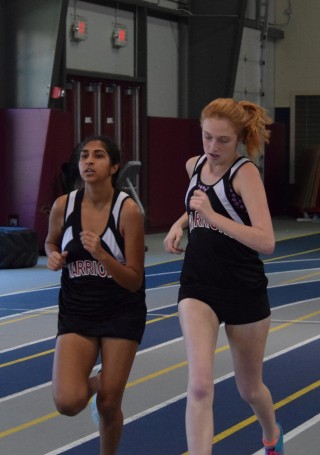 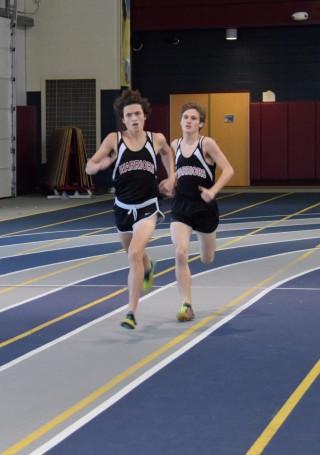 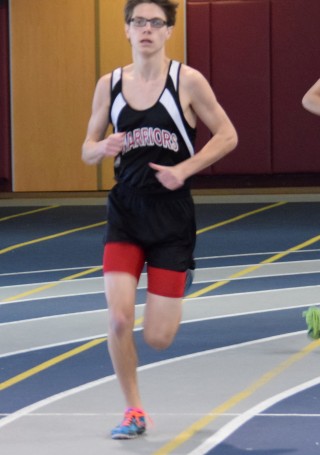 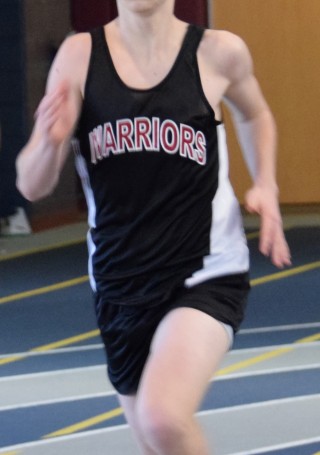 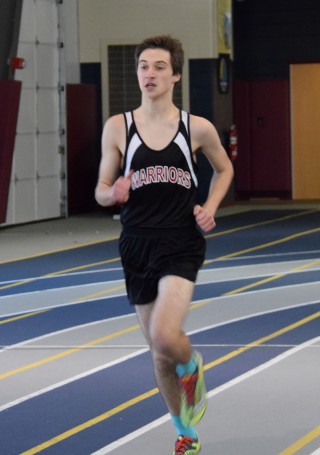 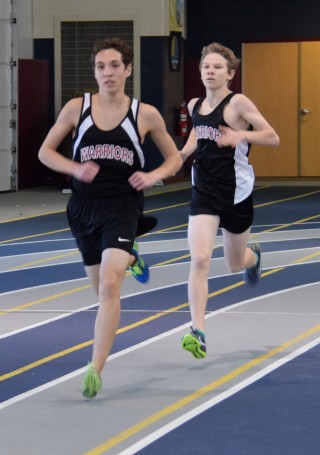 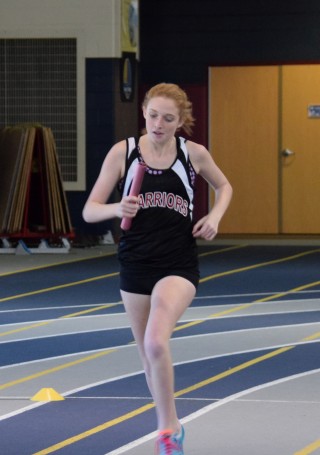 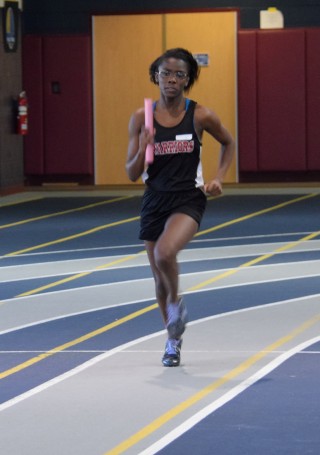 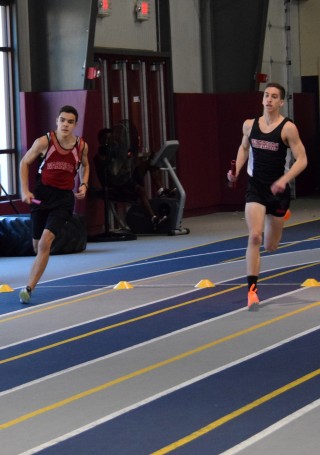 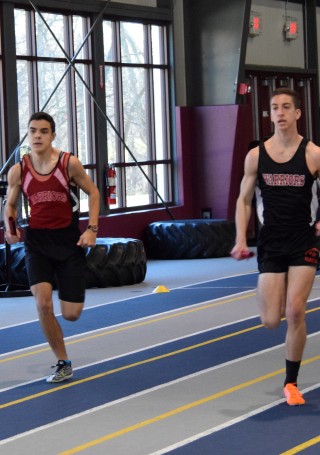 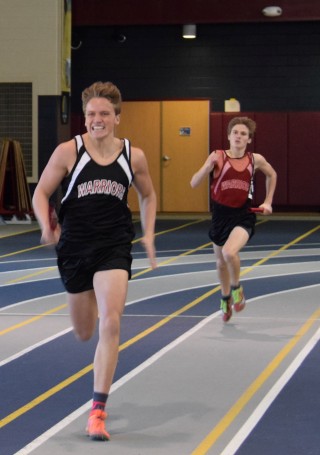 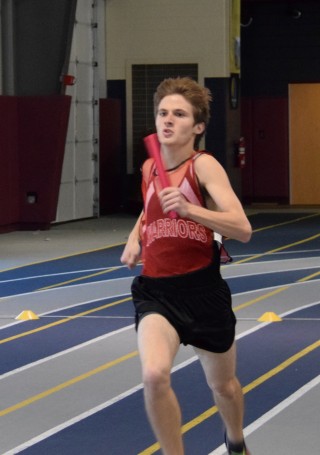 A record 26 Warrior athletes traveled to Fayetteville, Arkansas to compete in the Arkansas High School Invitational on Saturday January 17th. The Warriors arrived in Fayett

eville the night before and enjoyed the Arkansas vs. Texas duel track meet.

The Warriors were led by seniors Elijah McNairy (Parkway North) who finished 3rd in the 60 meter hurdles and Kevin Ganahl (Marquette)who placed 6th in both the mile and the 800 meters. McNairy became the 6th Warrior medalist in the last five years at the highly-competive mee 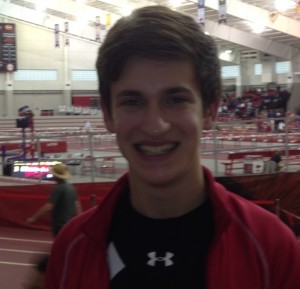 t and also recorded a time of 8.16 that ranks 15th in the country and set a new Warrior’s record. 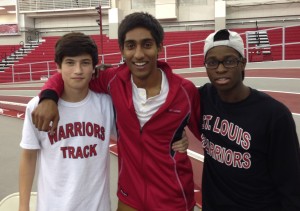 Several other Warriors hit PRs including Ganesh Gangasingh (Kirkwood) in the mile and the 800, Joe Pirrie (Grand Center Academy) in the 400 and Ethan Cadenhead (Webster Groves) in the triple jump. 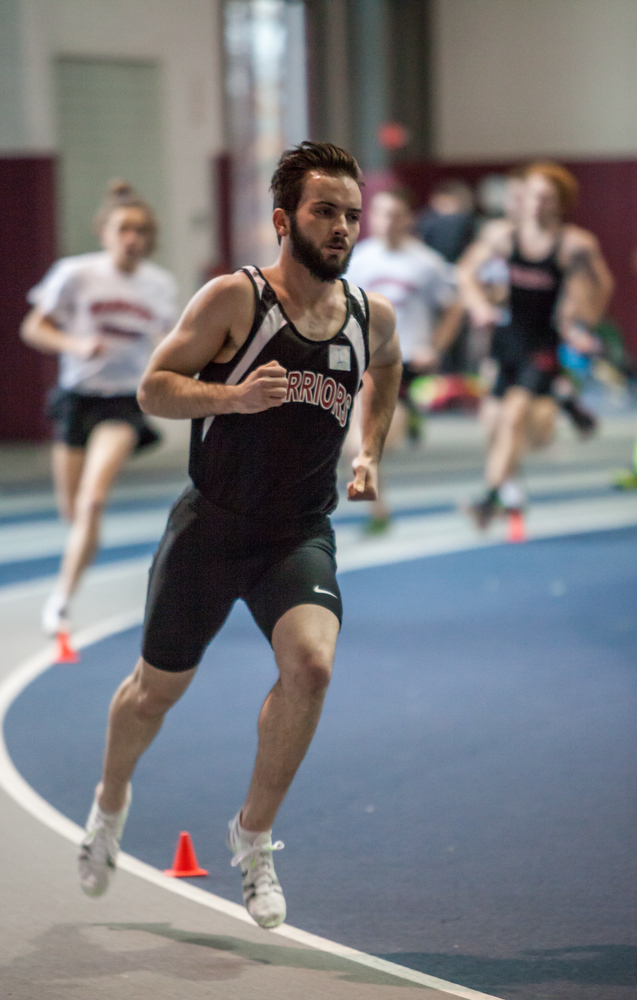 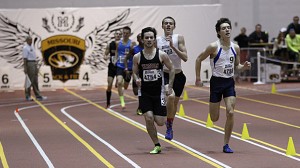 The St.Louis Warriors ended their 2014 indoor season at Mizzou in the second annual Mizzou Series Championship Meet on Saturday, February 22nd in Columbia. Sixteen Warriors competed.  The Warriors were led by Junior Kevin Ganahl (Marquette) who concluded an injury-plaqued indoor campaign on a remarkable note, winning the 800 meter championship in 1:59.7, Ganahl won a dog-eat-dog battle down the stretch with Dustan Davidson (SLUH) and Reno Law, one of the top runners in the State of Nebraska. Three other Warriors, Mark Sheridan (2:03.5), Kyle Lang (2:04.4) and Brendan Yeager (2:06.9) hit PR times in the 800. Sheridan, Lang, and Ganahl later teamed up with Trevor Rogan (Kirkwood) to run an all-time Warrior’s record of 3:38.26 in the 4 x 400, finishing fourth in a strong field.   Ravon LIngard (MICDS) concluded an outstanding Warrior’s career with a 4th place finish in the triple jump.Three other Warriors recorded PRs, Sam Hooks in the mile, Dillion Hodges in the 200 and Penina Nikundana in the 60 meters. Other outstanding performances were turned in by Nate Gelber, Ganesh Gangasingh, Drew Wagner, and Ewan Burns-Wilton in the mile, Michael Hernan in the 800, and Quinn Wilson in the high jump and 400. Finally, Sophia Vandermass competed well in the 60 and 200 meter races. Sophia, only a freshman, will end the season as the all-time Warrior’s record holder in the womens’ 60 meters at 8.64.  The Warriors will graduate only two seniors, so 2015 should be another great season for the Warriors !

The St. Louis Warriors opened their indoor season with a pair of meets in familiar venues. On Saturday January 11th the team traveled to Columbia, Missouri to run in the first of four championship series meets at Mizzou. After losing 11 seniors from last season’s team the Warrior’s welcomed 12 new athletes this season. At Mizzou, the Warriors were led by newcomers Mark Sheridan (Marquette) and Elijah McNairy (Parkway North). Sheridan, a transfer from North Carolina, finished 4th in an outstanding 400 field and ran a strong anchor leg on a 4 x 400 team that finished 2nd. McNairy finished 2nd in the 60 meter hurdles and ran a terrific 3rd leg on the 4 x 400 team.

On Saturday January 18th the Warriors competed in the prestigious Arkansas Invitational in Fayetteville, Arkansas. The team arrived in Fayetteville on Friday night and enjoyed the Arkansas vs. Texas track meet. On Saturday, Sheridan and McNairy again performed well with Sheridan running strong races in both the 400 and 800 and McNairy just missing the finals in the 60 meter hurdles with a 8.67 time, good for 9th overall. Warrior veterans Quinn Wilson (St. Mary’s) and Ravon Lingard (MICDS) turned in strong performances in the jump events. Wilson equalled his PR in the high jump and Lingard showed mid-season form in the long and triple jumps going 34’8″ in the triple. Lingard finished 4th last season in the triple jump at the Class 3 State Meet.        Warrior sprinters faired well with Marc Pitts of Parkway North breaking the Warrior’s record in the 60 meter dash with a 7.50 clocking. Nathan Duke of Westminster Christian Academy ran his PR in the 60 and also ran a strong 200. On the women’s side Freshman Sophia Vandermass ran strong in both the 60 and 200 meters. Middle distance runners had a good night with Kyle Lang of Marquette leading the way. Lang ran a PR of 2:05 in the 800, winning his heat. Later he joined Sheridan, McNairy and Pitts for a strong 4 x 400 performance. The team’s time of 3:37 was another all-time Warrior’s record.
On the distance side, Brendan Yeager (WCA) led the Warriors with a 4:40mile, finishing 23rd in a field of 103 runners. Yeager’s time was a PR, converted to a 4:38 1600, and was 20 seconds below his time the previous week at Mizzou. Amazingly, 4 other Warriors, Michael Hernan (Parkway South) and Ewan Burns-Wilton, Drew Wagner and Ganesh Gasgasingh – all of Kirkwood – ran PRs in the 1600/mile. Hernan, nearly won his heat and, like Yeager, made a significant time drop from the previous week’s effort at Mizzou. Trevor Rogan, also of Kirkwood, recorded the second best Warrior time of the evening  with a near-PR 4:53 and newcomer Nate Gelber (Whitfield)  ran a 4:56. Gelber was making his first appearance as a Warrior coming off an injury. He finished 2nd last fall in the Class 2 State cross-country meet.
Four Warriors were unable to compete at Arkansas, including sprinters Penina Nikundana (Grand Center Academy), and Dillon Hodges (Kirkwood) along with distance runners Sam Hooks (Kirkwood) and Kevin Ganahl (Marquette). Ganahl entered the season with high hopes after running an outstanding 4:051500 meter race last summer, finishing 2nd in USATF nationals in Edwardsville, Illinois. An ankle sprain suffered in December sidelined Ganahl, but he is expected to return in the next few weeks.

If you are interested in joining the Warriors, please direct your inquiries to: